Welcome to the second part of our Clojure-based exploration of Programming Bitcoin by Jimmy Song. In the first article, we tackled finite fields, which, when combined with this essay's topic, elliptic curves, produce elliptic curve cryptography—the basis of Bitcoin's signing and verification algorithms. The essential math we will learn in this section may seem difficult at first but it is very similar to what we learned before.

I am sure all of you are familiar with the equation of a linear function:

For those who need a refresher, it's the equation of a straight line, where $$m$$ is the slope and $$b$$ is the y-intercept.

And similarly you might also be familiar with the equation for a quadratic function:

And a cubic function:

The equation for an elliptic curve is very similar to these functions, especially the cubic function: 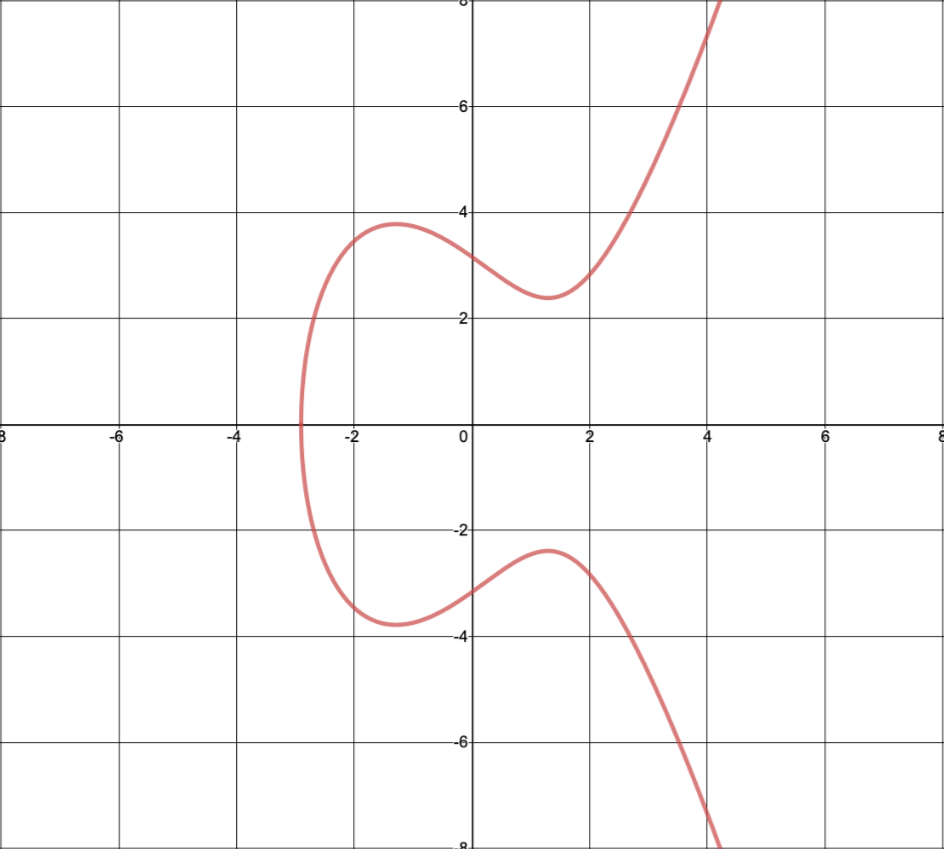 The elliptic curve used in Bitcoin has the name secp256k1 and has the equation: 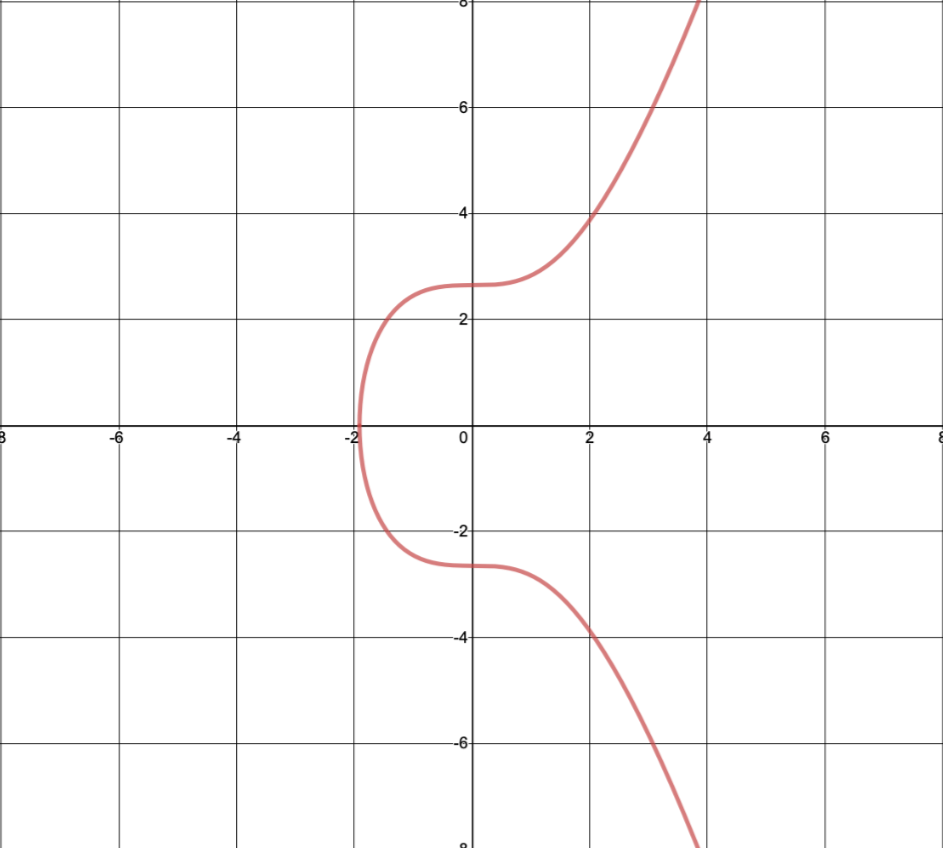 For reasons that will become clear in the next essay, we are only interested in points on the elliptic curve, and not the curve itself. So instead of modelling the curve itself in Clojure, we will be modelling points on a specific curve as a Clojure record, which we'll name Point. Since we know that curves are defined by their $$a$$ and $$b$$ constants, we can construct a Point with the x and y coordinates, and a and b constants:

We covered how records work in the last section, but for the uninitiated, you can think of them as an extensible key-value store with pre-defined fields To ensure the point is actually on the curve when we initialize a new Point, we will define a constructor function, which will do just that:

In a production app, we'd be doing more validation, using something like clojure.core.spec but that is outside the scope of this exploration. Now we can move on to the most important aspect of elliptic curves.

Elliptic curves are useful to cryptography because of a special property of adding points on a curve.

Point addition involves performing an operation on two points on the curve to get a third point, which is also on the same curve. While it is not the same as normal addition, it is called so, because point addition shares some of the same intuitions we associate with addition.

As it turns out, every elliptic curve has the characteristic that a line will intersect it at one point or three points, other than in the case of a few exceptions.

Here's what it looks like when the line intersects at three points: 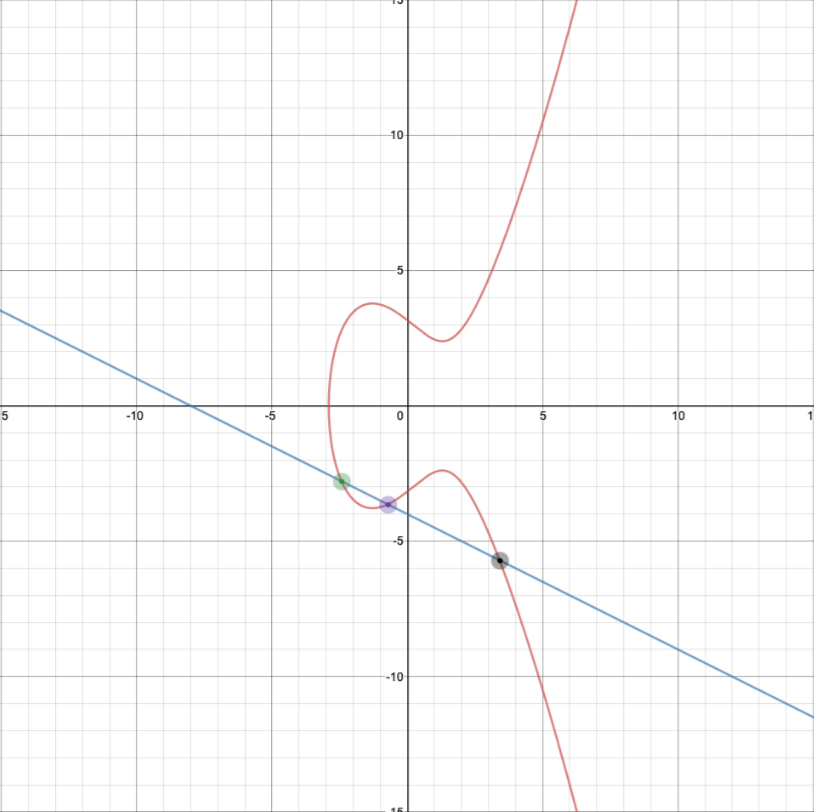 And at only one point: 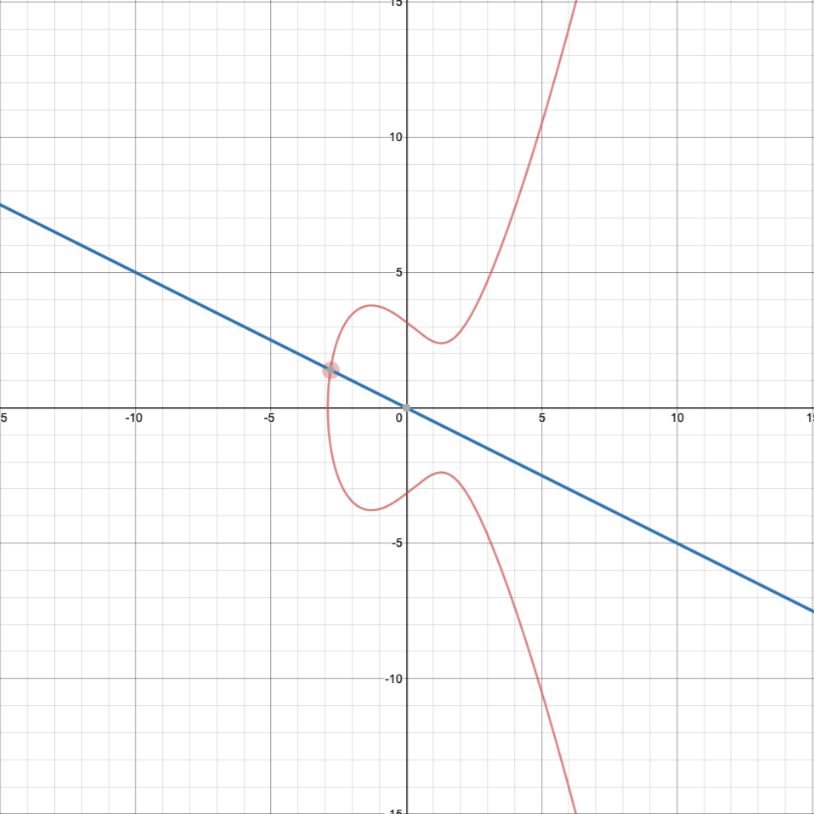 There are only two exceptions to this property, and one is when a line is vertical, like so: 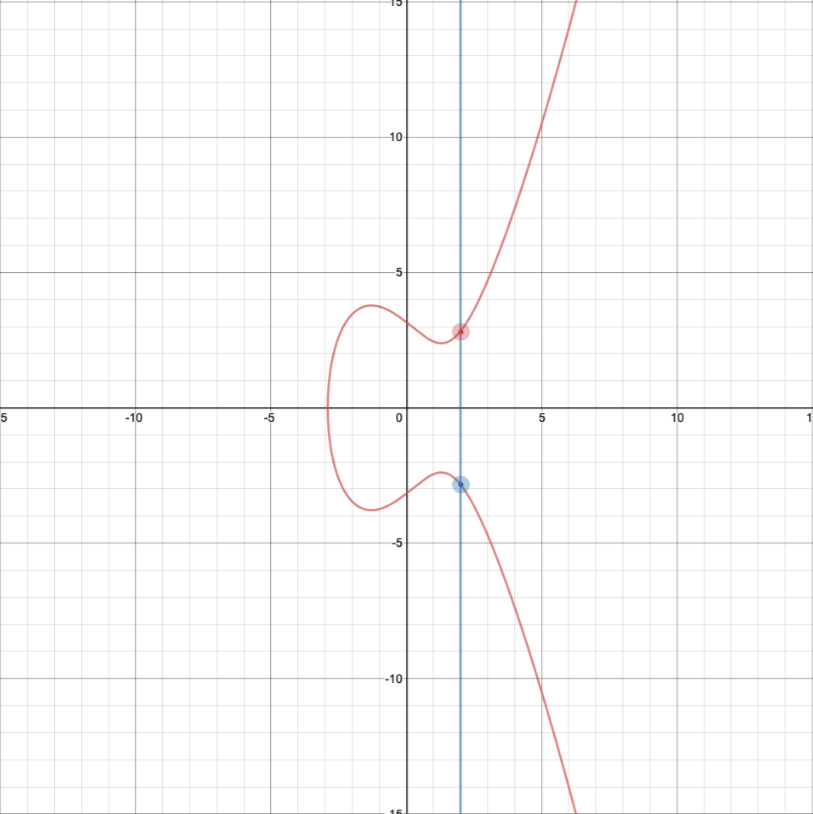 And the other is when the line is tangent to the curve, like this: 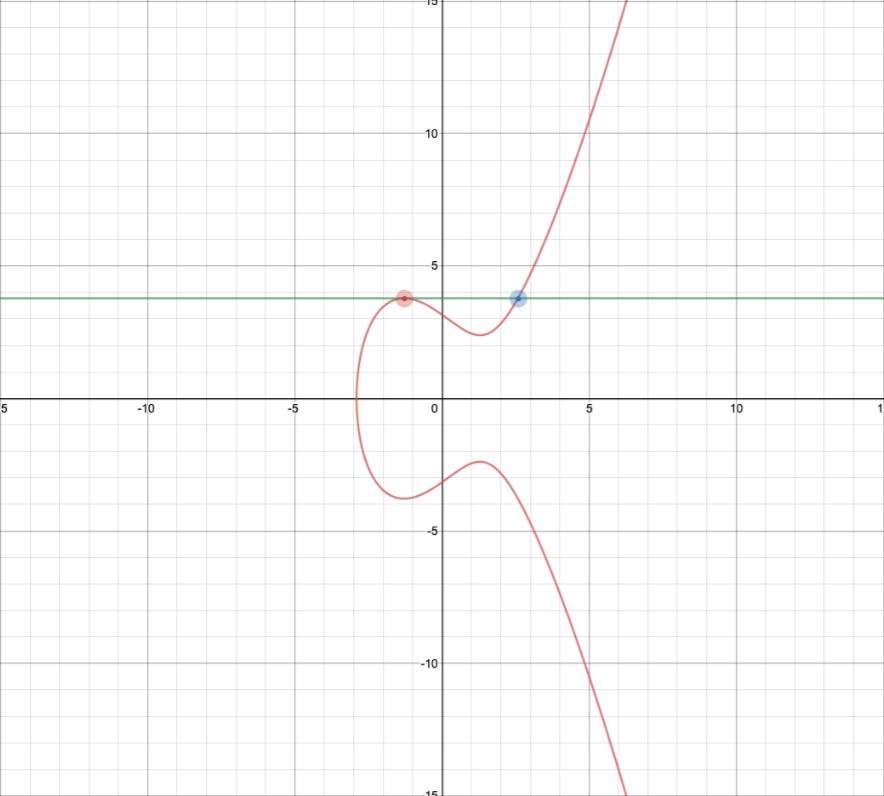 We'll be coming back to these two cases soon, but for now let's define point addition for the normal cases where the line intersects one or three points on the elliptic curve.

The way we do this is by finding the straight line that intersects the two points we want to add. Then we find the third point on the curve that the line intersects, reflect that point across the x-axis, and that point becomes our final result: 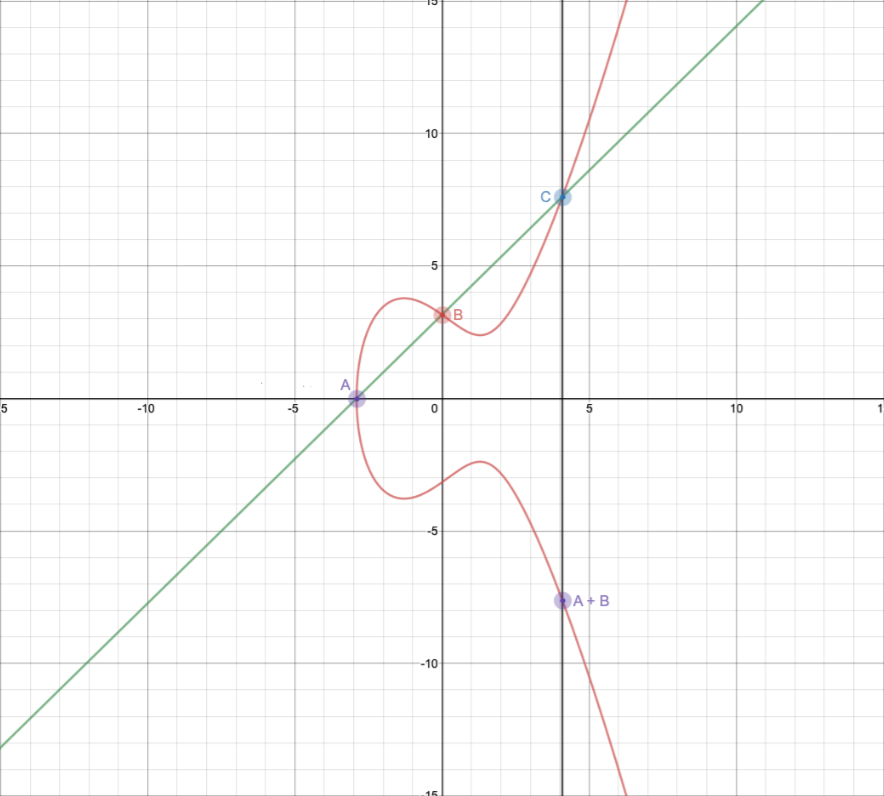 While we can calculate point addition easily with a formula, intuitively, it does not make as much sense, as the addition of two points can result in a third point almost anywhere on the curve. While normal addition is a linear operation, point addition is highly nonlinear. This unpredictability is a property we're going to use later when we get to elliptic curve cryptography.

Point addition is called addition because it shares four properties that we normally associate with addition: identity, commutativity, associativity, and invertibility. Identity, here, like in the case of finite field addition, means that there is a zero. What this means practically for point addition is that there exists a point $$I$$, that when added to any point $$A$$, will result in $$A$$, just like when you add 0 to any integer, you get the integer back:

This concept of $$I$$ is related to the property of $$invertibility$$ that states that for any point $$A$$, there is another point $$-A$$ that results in the identity point $$I$$. The same way when you add a positive integer and its negative counterpart, you get 0:

As you can see below, this is one of the special cases we discussed before where the line only intersects the elliptic curve at two points:

In the case of elliptic curves, we call the identity point the point at infinity. This is because there is a theoretical infinity point in the curve that will make the vertical line intersect the curve a third time. Commutativity means that the order of operation doesn't matter. So:

This can be seen easily in the diagrams, since the line going through $$A$$ and $$B$$ will result in the same third intersection point no matter whether you choose to add $$A$$ to $$B$$ or $$B$$ to $$A$$. The final property, associativity refers to this fact:

This means that the order of operations for compound operations also does not matter. While the graphs taken from Programming Bitcoin below do not prove this property in a mathematical sense, it gives us confidence that it is true: 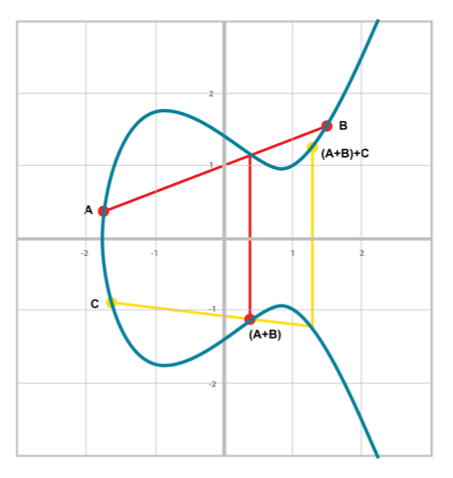 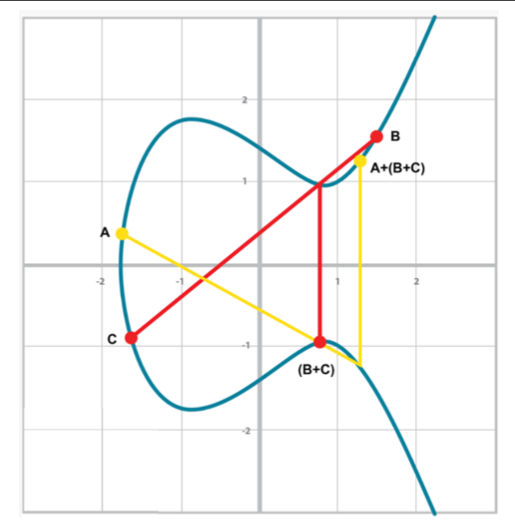 Let's split up the coding point addition into three sections to handle the three different variations:

In Clojure(script), we can represent Infinity with the ##Inf symbol. To get this working in Clojure, let's first make a change to our constructor function so it does not check the point at infinity's coordinates against the curve equation:

We'll first handle the cases for point addition where the points are in a vertical line or using the point at infinity:

We're deconstructing the arguments for the addition operation so we can more clearly access the record fields being passed through. And we assert the constants are the same so that we're adding points on the same curve.

For points that have different $$x$$ values, we first have to find the slope created by the two points we want to add:

First, we plug in our coordinates into the formula for a slope of a line:

Then we find $$x_3$$ using the formula we defined above:

And the final result:

Now let's code point addition for points with different $$x$$- and $$y$$-coordinates by adding another condition to our +p operator that implements the formulas we just discussed. We've extracted the slope formula in case we want to use it somewhere else.

We know that the slope at a given point is $$dy/dx$$ and to get this we need to take the derivative of both sides of the elliptic curve equation:

First we find the slope:

And we have our result:

As can be seen here, adding the same point on an elliptic curve to itself can yield highly unintuitive results.